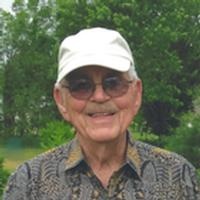 He attended public schools in Sikeston from grades one through twelve, graduating from Sikeston High School in 1949.

After graduation from high school Jack went to California and was employed at a factory in San Leandro, California when the Korean War broke out in the summer of 1950. Jack returned to Sikeston later that year and joined the U.S. Air Force in February of 1951. After basic training at Lackland Air Force Base in San Antonio, Texas he went to Technical School in Wahpeton, North Dakota.

Edwards was stationed at Burtonwood RAF Base near Liverpool England for three years, after a short time in Germany with the 1600 Military Air Transportation Wing.

In 1954 Edwards returned to the United States and was discharged from the Airforce in 1955 attaining the rank of Staff Sergeant, after serving his last 6 months of service at Vance Air Force Base in Enid, Oklahoma.

After his discharge Jack returned to Sikeston where he worked in the family store, Edwards IGA, and attended SEMO University.

After graduation from SEMO University, Edwards attended the University Of Missouri School Of Law in Columbia, MO. While in Law School he served as Revising Editor of the Missouri Law Review for 2 Years and was initiated into the Order of the Coif in recognition of his high scholastic achievement at the school which he later graduated from in 1961.

Upon graduation, Edwards returned to Sikeston to practice law where he became a member of the Dempster, Edwards, & Robison Law firm and later the Edwards and Robison Law Firm.

Edwards served as a Judge for over 14 years and he retired as Judge, January 1st, 1995, later serving as a senior Judge on special assignments from the Missouri Supreme Court for another 14 years.

Over the years Edwards has served as a member of Several Civic and Fraternal organizations including Sikeston Jaycees, Belle Lions Club, and President of the Rotary Club in Campbell, MO.

In lieu of flowers, expressions of sympathy may be made to the Koenig Methodist Church or to the MD Anderson Cancer Center in Houston, TX. 1515 Holcombe Blvd, Houston, TX 77030

To order memorial trees or send flowers to the family in memory of Jack O. Edwards, please visit our flower store.