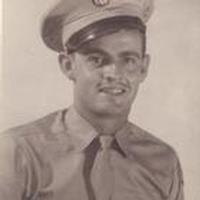 Huston A. Helmig, age 92, of Owensville and formerly of Washington, passed away Sunday, July 20, 2014, at Victorian Place in Owensville.

Huston served his country proudly during World War II as a member of the US Army.

Huston had worked for Farmer Brothers Capitol Sand doing dredging of the Missouri River, he also worked for the Corp of Engineers maintaining the channel lights on the river between Hermann and St. Charles before becoming a heavy equipment operator, a job he held for several years before he finally retired.

On August 12, 1961, he was united in marriage to Marie A. Begemann in Washington. She survives of Owensville.

He enjoyed fishing and in his earlier years enjoyed hunting and trapping.

In addition to Marie, his wife of 53 years, Huston is survived by: one son, Mark Easter of Belle; five daughters, Judy Pratt and her husband Wil of Laughlin, NV, Doris Meyer and her husband Rudy of Villa Ridge, Darlene Groene and her husband Jim of Owensville, Trudy Hyde of Bland and Rosely Farnsworth of Bland; one brother, Harold Helmig and his wife Sandy of Cocoa, FL; one brother-in-law, Harlan Begemann and his wife Sharon of Hanceville, AL; two sisters-in-law, Anna Marie Helmig of Belle and JoAnn Begemann of Festus; 11 grandchildren, 25 great grandchildren and 12 great great grandchildren as well as many nieces and nephews.

In addition to his parents, Huston was preceded in death by five brothers, a granddaughter, Michele Meyer and a grandson, James Farnsworth.

Expressions of sympathy may be made to St. John's Mantle UCC Cemetery fund or to the Honor Flight program.

To order memorial trees or send flowers to the family in memory of Huston A. Helmig, please visit our flower store.