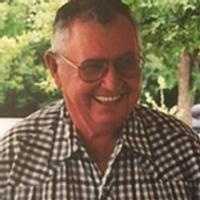 We believe; on a bright sunny day, May 11, 1927 a baby boy was born to Maymie and Albert (Dube) Stockton. He was given the name of Henderson Edward but most folks just called him Ed. He was a lifelong resident of the Belle-Bland area. He was raised with five siblings on the 200 year family farm and attended eight years at the Grovedale Country School. He served in the US Army from 1944-1946 where he was an M.P. as well as helped to rebuild war torn towns in the Alps Mountains, rebuild city streets, churches and schools, His home base was one of Hitlers Youth Camps.

After returning home, he married Lorna Smith, daughter of Murl and Mae Smith on April 10, 1948. To this union were five children, three boys and two girls. Ed was a lifelong farmer and worked for Yamnitz Concrete, the Brown Shoe Co., O'Sullivan Industry, Lorts Supermarket, Schaeperkoetter Meats, Thriftway Grocery and for Aprox. 25 yrs, Ed and wife Lorna were Co-Owners (with Brother-In-Law Dwight "Moody" and wife Dorothy Smith) of S&S Packing Co of Bland. Ed was a member of Liberty Church of Christ Church of Belle and attended as long as his health allowed. Ed was a 60 year plus member of the Belle Masonic Lodge.

Ed really didn't have hobbies, he just wanted to work and help others in any way he could. He touched many lives, loved his family and friends. He was the incubator of many stories, some may have touched you.

Ed will be sorely missed by his family & friends and all who knew him, We pray for the Lords tender loving care for him, where he can walk in straight rows of corn and count many cows in our Lords Pastures.

Funeral services will be held at 10:00 a.m. on August 18, 2016 at the Zion Evangelical Free Church in Bland with Jim Zumwalt officiating. Interment will follow at Grovedale Cemetery with full Military Honors.

To order memorial trees or send flowers to the family in memory of Henderson Edward Stockton, please visit our flower store.