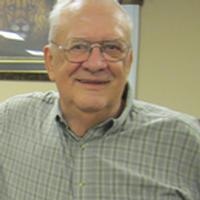 He was a lifelong resident of the area, a 1959 graduate of Linn High School and a member of A New Beginnings Church in Belle where he was baptized on January 17, 2013

On August 26, 1972, he was united in marriage to Brenda Nipper at the courthouse in Linn. Brenda survives of their home in Bland.

Babe was employed at General Motors in Wentzville for 31 years before retiring on March 1, 1990. After retirement, he worked as a guide at the Oakcreek Ranch in Bland for 10 years.

Babe was a hunter and a lover of the outdoors. He liked to hunt deer and especially squirrels. He was a lifetime member of the N.R.A. Babe could play any sport and was good at all of them. He enjoyed watching college football and was a St. Louis Cardinal fan. Other hobbies included fishing, gardening, doing word puzzle and word search books, and playing Mahjong in his computer. His greatest joy, however, was being a grandpa and a great-grandpa. He will be missed by those who knew and loved him.

In addition to his wife of 43 years, Babe is survived by: three children, Monica L. Czeschin of Bland, Kelli Shaon and her husband Mike of Columbia, and Jayme Czeschin of Bland; grandchildren, Melisa A. and Matthew E. Driskell, Dustin Czeschin, Ava Czeschin, Aaliyah Czeschin, and Landon and Lola Shaon; one sister, Effie Freie of Jefferson City; his mother-in-law, Ilene Nipper of Granite City, IL; a daughter-in-law, Gina Czeschin as well as many extended family members and friends.

Visitation will be held from 10:00 a.m. to 1:00 p.m. on Wednesday, November 18, 2015, at Sassmann's Chapel in Belle. Funeral Services will begin at 1:30 p.m. with Pastor Lorain Bossaller officiating. Interment will follow at Countryside Memorial Gardens near Bland.

Expressions of sympathy may be made to the family of Harlin "Babe" Czeschin.

To order memorial trees or send flowers to the family in memory of Harlin "Babe" Czeschin, please visit our flower store.