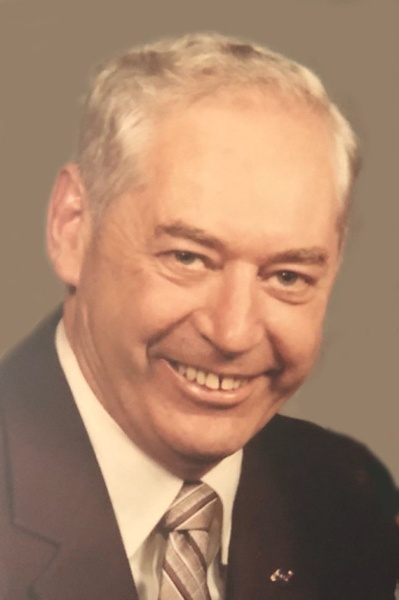 Gilbert was born January 17, 1928 in Cambridge, Minnesota, the second of seven children born to the late Paul Reuben and Harriet (Oman) Becklin.

Following his 1946 graduation from Cambridge High School, Gilbert enlisted in the United States Air Force. As a Sgt., Gil worked on Atomic Energy, Radar Systems, 1st signal Radio Maintenance, special weapons, and was a electronic instructor at Boca Raton Florida, Keesler Field, Mississippi, Sadia Electronic Labs in New Mexico, and Kelly Field, Texas. Gilbert was discharged in 1950 and went to work for the Philco Company as a technical representative during the Korean War. He was assigned to the Army Gun laying Radar School in Ft. Bliss as an instructor.

While assigned to Ft. Bliss, Gil met Wanda D. Brooks. The two were united in marriage on July 7, 1951. Wanda preceded him in death in September of 1998.

In 1955 went to work for the Firestone Tire and Rubber company in Southgate, CA and then later for the Bendix Corporation as an instructor in radar for the Air Force. Between the years of 1958 and 1962, Gil was assigned to different jobs as an advisor and manager in the space program at satellite tracking stations. In 1962, after a short stint with the Forestry Dept., he was hired at NASA as a computer specialist at the Goddard Space Flight Center in Greenbelt, Maryland. Gil retired from NASA in 1984 after 22 years of service. His NASA job took him to many places including Woomera Australia, Ascension Island in the South Atlantic, Fairbanks Alaska, Winkfield England, Santiago Chili, and Quito Ecuador.

Gil was preceded in death by the love of his life, Wanda (Brooks) Becklin, second wife, Mary A. Becklin (Bilbrey) and his parents, two brothers Robert and Donn Becklin, 2 sisters-in-law Annie and Joyce Becklin, and one brother-in law George Wilkie.

Memorial services for Gilbert will be held this summer at the Delaware V.A. Cemetery in Millsboro, Delaware. Contact the family for more information.

To order memorial trees or send flowers to the family in memory of Gilbert Paul Becklin, please visit our flower store.