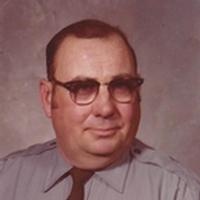 Gerald Stanley Schaning, age 86, of Bland, passed away May 6, 2015 at Frene Valley South in Owensville. He was a member of the Liberty Church of Christ in Belle.

He was born on July 25, 1928 in Summerfield, a son to the late Louis Edward and Mary Alta (Shanks) Schaning.

Gerald was united in marriage to Evelyn Muriel (Spratley) Schaning on December 20, 1947 in Jefferson City. To this union two children, Darrell and Marsha, were born.

Gerald was employed by the Missouri Department of Conversation in the Forestry Division from 1950 until 1990. He also did carpentry and woodworking projects for the Conservation District Offices. During this time, he also worked for the city of Bland as the night Marshal for 11 years. Gerald really liked his work because of his love for the outdoors. After he retired, he served as the Bland City Park Superintendent for several years and had numerous lawns in the area that he mowed. He loved making a garden and watching the fruits of his labor grow.

In addition to his wife, Evelyn, Gerald is survived by: one daughter, Marsha Farris and her husband Howard of Owensville; two granddaughters, Mackenzie Farris of Owensville and Catina McAmis of Wright City; three great-grandchildren, Courtney Estes of Union, Cassandra Estes of Turkey, and Colten Helmig of Beaufort as well as many extended family members and friends.

He was preceded in death by: one brother, Eugene Schaning; one son, Darrell Schaning; and a daughter-in-law, Rita Schaning.

Funeral Services will be at 10:00 a.m. on Saturday, May 9, 2015 at Sassmann's Chapel in Bland with Randy Carr officiating. Interment will follow at Liberty Cemetery near Belle.

To order memorial trees or send flowers to the family in memory of Gerald Stanley Schaning, please visit our flower store.