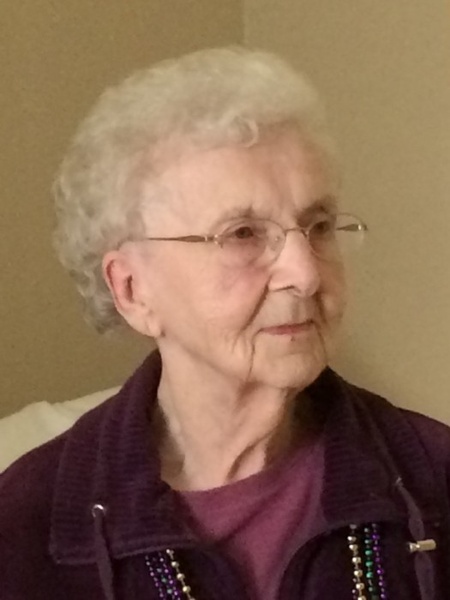 Geneva Lucille Leffler Sassmann, 99, of Bland, died Wednesday morning, September 11, 2019, in the Frene Valley Nursing Home. She is one of nine children born to the late William Edgar and Elizabeth Victoria Schoenaur Leffler. On October 18, 1941, she was joined in marriage to Chester William Sassmann and to this union two sons were born.

Geneva graduated from the Belle High School and began her college education in Warrensburg. After an interruption caused by finances, war, and family, Geneva eventually earned a Bachelor and Master’s degree at Lincoln University. She taught school in Bland and in Belle, raised a family, and participated in the family funeral business.

Surviving Geneva is a son Bruce with his wife Jan, daughter in law Sue, two grandchildren Scott and Julie, and five great grandchildren Alexis, Isabella, Abbigail, Charity, and Morgan. Also surviving is the youngest of her siblings, Dorothy Bruton of Bellflower, California.

The last ten years of Geneva’s life she suffered and struggled with dementia. During those years she received great care from the staff and administration of the nursing home. Today she is at peace.

Visitation for Geneva will be held from 9:00 a.m. until 11:00 a.m. on Saturday, September 14, 2019 at Sassmann’s Chapel in Bland. Funeral services will follow at 11:00 a.m. Interment will be in Countryside Memorial Gardens near Bland.

Expressions of sympathy may be made to the David Sassmann Scholarship Fund.

To order memorial trees or send flowers to the family in memory of Geneva Lucille Sassmann, please visit our flower store.