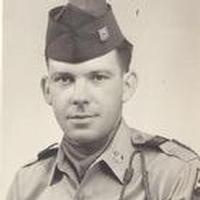 Gene attended high school in Elk City, OK before serving his country in the U.S. Army and was stationed in Germany. On November 28, 1958, Gene was united in marriage to Movita Steinly in Wheeler, TX. From this union, four children were born and raised on the family farm in Bland. Gene was a very hard worker and passed that trait onto all of his children. His wife of 55 years survives at the home in Bland.

Gene worked as a heavy equipment operator and was a member of the Operating Engineer Local #513. He worked in the central Missouri area for over 35 years. After retiring, he was known to run his own dozer, digging out ponds for people, as well as cutting wood and custom hay bailing for many area residents.

Gene was a lifelong resident of the Belle/Bland area and a member of the Belle United Methodist Church. He was a music lover and a musician. He played the guitar and could "flat play the mandolin." As a younger man, he played the electric guitar in a rock-n-roll band but, as he got older, graduated into bluegrass and country. Even in his later years, before his health declined, he loved to play. Gene liked to fish, coon hunt and loved to work the farm and the cattle. But his biggest love and joy was time spent with his family. He was a wonderful husband, father, grandfather, and great-grandfather. He will be missed and remembered fondly by all who knew and loved him.

In addition to his parents, Gene was preceded in death by one sister, Helen (Dingley) Theroff, one brother-in-law, Jewel Dingley and one son-in-law, Steven Budnik.

Visitation will be held from 4:00 p.m. to 8:00 p.m. on Thursday, June 5, 2014, at Sassmann's Chapel in Belle. Funeral services will be held at 10:00 a.m., Friday, June 6, 2014, at the Belle United Methodist Church, with Pastor Sandra Dixon officiating. Interment will follow in the Liberty Cemetery near Belle with full military honors.

In lieu of flowers, expressions of sympathy may be made to the Belle United Methodist Church.

To order memorial trees or send flowers to the family in memory of Gene T. Harris, please visit our flower store.
Send a Sympathy Card