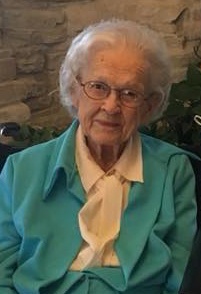 Floreine Stockton, was born Floreine Alice Auf Der Heide , April 1st 1918 at Bland, Missouri to Henry John Auf Der Heide and Una May Tyree Auf Der Heide.  She was the first child born to Henry and Una, and she would be followed by six brothers and sisters. Sister Florence May was born June 12th 1920.  Florence married Clifford Hironimus and lived her life in Waukegan, Illinois.  She died there April 24th 2015.  Brother Warren Arthur was born November 15th 1922.  He died in Owensville January 27th 2001.  Sister Wilma Ruth was born January 11th 1925 and died in Belle January 30th 1991.  Brother David Robert was born March 26th 1928 and died April 30th 1928.  Sister Lois Marguerite was born February 12th 1932.  She married Robert Beasley from Mississippi.  They lived their lives in Illinois where she died May 14th 2014.  Sister Sarah Dorrine was born May 22nd 1934.  She married Raymond Bock in Belle and died there April 11th 2004.

The Great Depression was in full force in 1934 when Floreine quit school after the 10th grade and went to work in the Broom Factory in Bland to help support her family.  On April 8th 1939 she married Winferd Bray (W.B.) (Bud) Stockton.  They initially lived in an upstairs apartment with the George Slinkman family, two houses up from the four way stop in Belle.  Bud got a contract to deliver rural mail and they delivered mail together for a few years.  They moved to St Louis when Bud went to work at the General Motors Assembly Plant there. In 1940 and 1941 they built the house on highway EE where they would spend the rest of their lives.  Their only child, son John was born July 1st 1943.  In August 1944 Bud was drafted into the Army.  Floreine and John lived with Buds parents, Richard and Stella, on their farm while Bud was overseas.  When Bud returned to the states, Floreine and John joined Bud and lived in Southern Pines, North Carolina until Bud was discharged from the 82nd Airborne Division in April 1946.  After the war Floreine went to work in the Belle Shoe Factory and Bud in the Belle Counter Factory.  Being a self-taught electrician, Bud wired houses in his spare time and in 1948 started a construction company and built rural electric lines for Three Rivers Electric Coop in Mid Missouri.  Floreine became the bookkeeper for the company.  In 1953 Bud and Everett Elrod opened a Lime Quarry.  Floreine was not only the bookkeeper, it was her job to collect payment for lime, which many of the older farmers refused to pay because they thought that the government was paying for it or should pay.  Floreines’ father, Henry was living with them when he died in August 1956.  In 1957 Bud built charcoal kilns and started Stockton Charcoal, again Floreine was the bookkeeper.  She also prepared taxes for many local people.  She was secretary for the Belle Fair for 15 years.  She became an accomplished rider until she barely survived after being thrown by a horse onto a paved highway in 1968.  Her mother, Una May died in April 1989.  Bud died in February 1995. Floreine lived alone until December 2016 when she moved to Frene Valley in Owensville.  She celebrated her 100th birthday on April 1st with all her grandchildren and great grandchildren present.

Visitation for Floreine will be held on Friday, May 25, 2018 at Liberty Church of Christ from 10:00 a.m. until 11:00 a.m. Funeral services will be at 11:00 a.m. with Randy Carr officiating. A luncheon will follow the funeral service and interment will take place at 1:30 p.m. in the Grovedale Cemetery near Belle.

To order memorial trees or send flowers to the family in memory of Floreine A. Stockton, please visit our flower store.