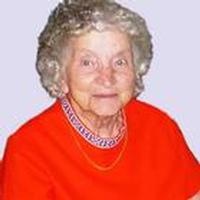 Fern was born on October 26, 1929, in Washington County Missouri, a daughter to the late John and Ann (Wade) Mercer.

Tom and Fern moved to the Bland area from Japan, Mo. in 1973 and remained residents for 41 years.

Fern was a member of the Assembly of God Church in Belle.

Fern worked for the International Shoe company and cleaned houses for a while but her main job was spent as a homemaker. She loved taking care of her family. Her other loves included, cooking, gardening, canning, sewing, and going to church picnics throughout the area. She was a music lover who wrote her own songs, sang, and played the guitar as well as the piano. She also enjoyed attending gospel sings when she could. Fern will be greatly missed by all that knew and loved her.

In addition to her parents and husband of 63 years, Fern was preceded in death by one brother, John Mercer and five sisters. Martha Isgrigg, Ellie Gibson, Grace Stroup, Dolly Short, and Violet Parker

Funeral Services will be held at 10:00 a.m. on Wednesday, September 24, 2014 at the Assembly of God Church in Belle with Bro. Bill Perkins officiating. Interment will be held at the Countryside Memorial Gardens near Owensville.

In lieu of flowers expressions of sympathy may be made to the Belle Assembly of God church.

To order memorial trees or send flowers to the family in memory of Fern Pauline Stroupe, please visit our flower store.