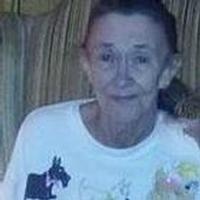 Fern was born June 22, 1934, in Summerfield, a daughter to the late James Elijah and Myrtle Neva (Ridenhour) Jones.

Fern was a lifelong area resident and had worked for the International Shoe and Brown Shoe factories for several years.

She enjoyed growing flowers, fishing, hunting, feeding the deer, country music, watching westerns and taking photos, which was a hobby she passed down to several of her grandchildren. Fern also loved animals of all kinds.

In addition to her parents and husband, Fern was preceded in death by: one brother, Edward Jones, a grandaughter, Paula Sue Jones and two great grandsons, Eddie Jones and Dylan Nichols.

Visitation will be from 10:00 a.m. until noon on Friday, March 21, 2014 at Sassmann's Chapel in Belle. Funeral services will follow at noon with Mitchell Seaton officiating. Interment will follow in the College Hill Cemetery.

Expressions of sympathy may be made to the Litton Family in care of Sassmann's Chapel.

To order memorial trees or send flowers to the family in memory of Fern A. Litton, please visit our flower store.