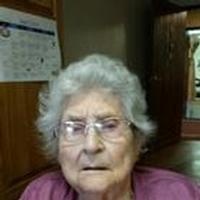 Fern was born on March 27, 1919, in Vienna, a daughter to the late Oliver and Viola (Honse) Hopkins.

Fern and her husband owned and operated several business' including a farm, restaurant, service station, and laundry mat. She also owned and operated Clark's Machine Quilting in Belle along with a shoe store and was a cook for the Maries County School.

In addition to her parents and husband of 54 years, Fern was preceded in death by a daughter-in-law, Bette Clark and a grandson, Todd Clark.

Visitation will be held from 1:30 p.m. to 2:30 p.m. on Saturday, May 24, 2014, at Sassmann's Chapel in Belle. Funeral Services will follow at 2:30 p.m. with Pastor Dean Catlett officiating. Interment will be held at the Liberty Cemetery near Belle.

Expressions of sympathy may be made to the Missouri Alzheimer's Association.

To order memorial trees or send flowers to the family in memory of Fern Clark, please visit our flower store.