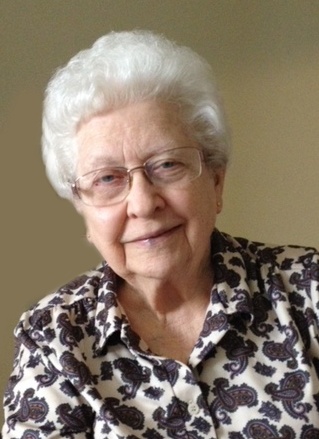 Evelyn Muriel (Spratley) Schaning, age 88, of Bland went to her heavenly father August 6, 2018 at Frene Valley of Owensville. Muriel, as she preferred, had been a resident of Frene Valley since April 10, 2014. Muriel was a member of the Liberty Church of Christ of Belle where she attended services until her health prevented her from getting out.

She was born September 5, 1929 in the Vienna area to the late Earnest William and Edna Muriel (Gray) Spratley.  Muriel was united in marriage to Gerald Stanley Schaning December 20, 1947 in Jefferson City, MO. To this union, two children were born, Darrell and Marsha.

She was preceded in death by her husband Gerald, son Darrell, and daughter-in-law Rita Schaning.

Muriel was never a stay at home wife or Mother. She worked her whole life in various factories. She started working as a house keeper in Jefferson City. When the Schanings moved to Bland Muriel started working for International Shoe Co. where she worked for 15 years. She also worked for A B Chance Co. in Washington and Bland. Her final position was at Hoffman Brothers in Owensville where she made choir robes as a seamstress. At her retirement in 1991 she had the best job of her life to hear tell about it. She babysat her granddaughter Mackenzie for the next four years.

Muriel was an avid canner of home grown vegetables. She would put many away for the next year. She loved to cook and bake and was always ready to help anyone who needed it. She loved her family and was a wonderful wife and Mother. She will be sadly missed by all who loved her.

Funeral services will be at 11:00 a.m. on Thursday, August 9, 2018 at Sassmann’s Chapel in Bland with Randy Carr officiating. Interment will be in the Liberty Cemetery near Belle.

Expressions of sympathy may be made to the family of Muriel for the Alzheimer’s Association.

To order memorial trees or send flowers to the family in memory of Evelyn Muriel Schaning, please visit our flower store.