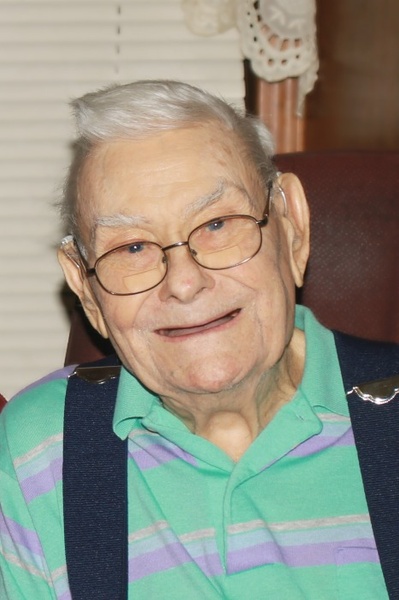 Elmer Ray Party, age 98, of Belle passed away on Saturday, February 17, 2018 at the Phelps County Medical Center in Rolla.

Ray was born on June 5, 1919, in rural Osage County, the son to the late Robert and Rachel (Kemple) Party.

He attended school in Chamois and following High School, enlisted in the U.S. Navy. Ray served his country proudly in the Pacific and European theaters during WWII receiving several medals including the Purple Heart.

Ray retired from McDonnell Douglas after being employed there for over 30 years. He was a member of the R.L.D.S Church in St. Louis and had been attending the Community of Christ Church in Belle.

Ray had been a member of the Fraternal Order of the Eagles in St. Louis and liked to attend V.F.W. meetings and go to their dances with his wife June. He enjoyed gardening various vegetables in his big garden, fishing and frying what he caught, playing Pinochle, mowing, and being a “Shade Tree Mechanic”. Ray loved it when company came so he could visit but his greatest joy was the time he spent with his family.

Ray is survived by: one daughter, Susan Butler and her husband Leroy of Belle; three grandsons, Mike Costley and his wife Mandy, Ryan Costley, and Steven Costley and his Fiancé Amber; four great-grandchildren, Austin. Kaitlinn, Colton, and Chase Costley as well as many extended family members and friends.

In addition to his parents and spouse Ray is preceded in death by one daughter, Cheryl Costley and eight brothers and sisters.

Visitation will be held on Wednesday, February 21, 2018 from 11:00 a.m. until 2:00 p.m. at Sassmann’s Chapel in Belle. Funeral Services will follow at 2:00 p.m. Interment will be in the Community of Christ Cemetery near Linn.

Expressions of sympathy may be made to the Charity of the Donor’s choice.

To order memorial trees or send flowers to the family in memory of Elmer Ray Party, please visit our flower store.