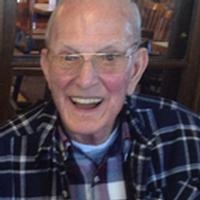 Edwin was born June 6, 1930 in Washington, a son to the late Edwin Fred and Cecilia (Schmuke) Freie. Along with his family, Edwin moved to Owensville and helped his father with his paper delivery company and later went to work for the Brown Shoe Company.

He attended school in the Washington School System.

On March 24, 1951, Edwin was united in marriage to Effie Czeschin. She survives of Jefferson City.

Following his marriage to Effie, on November 19, 1952, Edwin enlisted in the United States Air Force serving until his discharge on March 24, 1954.

Edwin was well known throughout mid Missouri for his band, "Eddie and the Missouri Ramblers". They provided great entertainment for the Saturday night dances and church picnics as well as other venues. He made many friends and acquaintances through his different jobs. They included the Great Plains Delivery Company, McQueen Chevrolet, Beaufort Transfer Company and the Globe Democrats Delivery Company. Edwin loved spending time with family and friends. He will be missed greatly by those who knew him.

Edwin is survived by his wife of 62 years, Effie Freie; a son, Gary L. Freie and his wife Penney (McQueen) Freie; as well as many nieces, nephews, extended family members and friends.

In addition to his parents, Edwin was preceded in death by: two brothers, Earl and Bill Freie and three sisters, Mary Campbell, Jane Shert, and Dorothy Sullinger.

Funeral Services will be held at 11:00 a.m. on Monday, November 9, 2015 at Sassmann's Chapel in Belle with Bro. Jimmy Bickell officiating. Interment will follow in the Owensville City Cemetery with full Military Honors.

Expressions of sympathy may be made to Wounded Warrior Project.

Burial will be at Owensville City Cemetery

Burial will be at Owensville City Cemetery

To order memorial trees or send flowers to the family in memory of Edwin A. Freie, please visit our flower store.