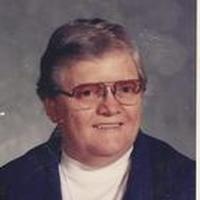 Edith was born on September 25, 1929, in Ollie, Iowa, a daughter to the late William J. and Margaret (Alter) Ledger.

Edith was a 1949 graduate from Mt. Pleasant High School in Iowa and a graduate of Mercy School of Nursing located in Burlington, Iowa.

Edith was a registered nurse for over 50 years and was employed with the Belle School District and Gasconade Manor after she and Henry moved to the Belle area in 1965.

She was a member of the First Christian Church of Belle, the Willing Workers Church Group, and the Missouri Nurses Association.

Edith enjoyed gardening and her favorite flower was the red rose. She also enjoyed sewing, cross stitch, squirrel hunting, card games and chess. Edith loved her Lord and was always helping others. She enjoyed listening to gospel and older country music, but Edith's greatest joy was spending time with her children and grandchildren.

In addition to her parents and her spouse of 34 years, she was preceded in death by: a daughter, Mary Margaret Bush; a step grandchild, Sherri Butler; and a daughter-in-law, Debbie Bush.

Funeral Services will be held at 10:00 a.m. on Monday, December 15, 2014, at the First Christian Church in Belle with Pastor Mitchell Seaton officiating. Interment will follow at Countryside Memorial Gardens Cemetery near Owensville.

Expressions of sympathy may be made to the Shiloh Christian Children's Ranch, PO Box 606, Shelbina, MO 63468.

To order memorial trees or send flowers to the family in memory of Edith A. Bush, please visit our flower store.