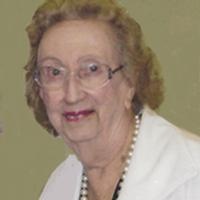 Dorothy was born on April 17, 1925, in Maries County, a daughter to the late Benny C. and Mary (Garrett) Barrick.

Dorothy was employed by both Brown and International Shoe Companies for almost 30 years.

Dorothy was a lifelong area resident. She was an active member of Liberty Church of Christ. Dorothy enjoyed quilting and sewing, gardening, cooking, canning and loved flowers. However, her greatest joy was spending time with her family.

Dorothy is survived by: three daughters, Mary Brown of Belle, Paulette Scott of Belle, and Paula Cox of Columbia; four grandchildren; twelve great-grandchildren and many nieces, nephews and friends.

In addition to her parents and spouse, she was preceded in death by: two brothers, Fritz and Freddie Barrick; one sister, Pauline Phelps; and a son-in-law, Marion Brown.

Visitation will be held from 1:00 p.m. to 2:30 p.m. on Tuesday, March 22, 2016, at Liberty Church of Christ in Belle. Funeral services will follow at 2:30 p.m. with Randy Carr officiating. Interment will be in the Liberty Cemetery.

Expressions of sympathy may be made to the Liberty Church of Christ.

To order memorial trees or send flowers to the family in memory of Dorothy Marie Cox, please visit our flower store.