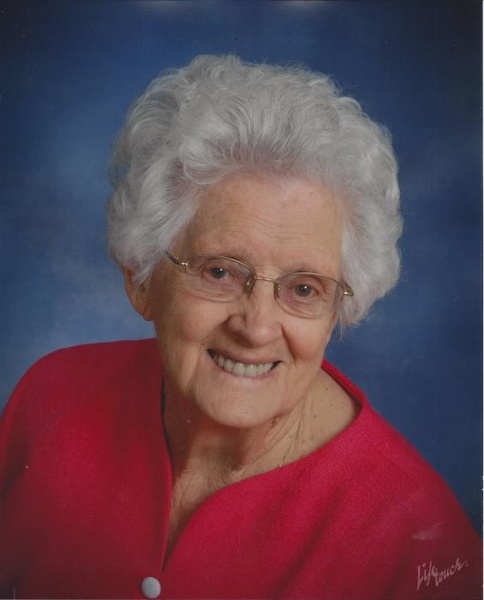 Dorothy Rena (Hassler) Bacon went to her heavenly home on Tuesday, January 16, 2018 at Westphalia Hills Nursing Home with her family by her side.

She was born November 4, 1919, in Cooper Hill, Missouri, daughter of the late Millard Franklin Hassler and Etta (Jett) Hassler. Dorothy gave her heart to the Lord Jesus Christ at the age of 11 during a revival meeting at the College Hill Baptist Church.

Dorothy attended elementary school at the Post Oak country school and graduated from high school in Belle, MO. Dorothy was united in marriage to Victor Scott Bacon on November 6, 1943. Scott preceded her in death on August 17, 2007

Dorothy was a homemaker who worked outside the home for a short time at the shoe factory in Jefferson City. She was a farmer’s wife who enjoyed working in the garden, canning the garden produce, baking homemade bread, milking cows, tending to the chickens, sewing clothes for the family as well as making quilts and comforters for family and friends. Dorothy was known for the good meals she prepared for the hay hands who helped put up square bales in the hot summers on their farm. In her later years, she lived near her daughter and son-in-law in the senior living in Taos and enjoyed watching the St. Louis Cardinal games, playing dominoes, Scrabble, and Bingo with her neighbors. She passed her time embroidering baby quilts and lap quilts that she gave away to family, friends and neighbors as gifts. She was a lifelong member of the College Hill Baptist Church until moving to Taos. She then moved her membership to the Cornerstone Baptist Church in Jefferson City where she was welcomed into the fellowship and friendship of their church family.

Visitation will be held on Saturday, January 20, 2018, from 9:00 a.m. until 10:00 a.m. at Cornerstone Baptist Church in Jefferson City. Funeral services will follow at 10:00 a.m. Interment will be at Countryside Memorial Gardens near Bland.

Expressions of sympathy may be made to Hospice Compassus, 600 Monroe Street, Suite 100, Jefferson City, MO 65101.

To order memorial trees or send flowers to the family in memory of Dorothy R. Bacon, please visit our flower store.