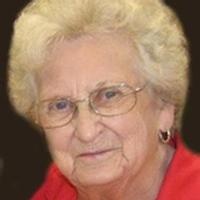 Doris was born August 25, 1931, in Belle, a daughter to the late William Roscoe and Ethel (Maples) Graham.

Doris attended school in Belle and was a lifelong area resident.

Doris worked at the International Shoe factory in Belle for several years until it closed. She also worked for Missouri Home Care before retiring.

Doris was a member of the Faith Baptist Church in Belle and the VFW Ladies Auxiliary. She enjoyed bingo, shopping, dancing, playing the slots and spending time with her family.

Doris is survived by: one son, Greg Knott of Belle; one daughter, Trina Backues and her husband Terak of Belle; a granddaughter, Graci Lou Backues; one brother, Mike Graham of Belle as well as many nieces, nephews and friends.

In addition to her parents and spouse of 63 years, Doris was preceded in death by four brothers, Ed, Dwayne, Mackie and Randall Graham and two sisters, Peggy Lou Phillips and Wilma Jean Bogler

In lieu of flowers, expressions of sympathy may be made to the Doris Knott family.

To order memorial trees or send flowers to the family in memory of Doris M. Knott, please visit our flower store.