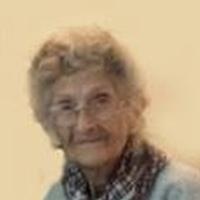 Dora was born July 13, 1928, in East Prairie, Missouri, a daughter to the late Fred and Elizabeth (Roach) Taylor.

Dora loved being a mom and homemaker. However, she was employed at White Castle in St. Louis for over 17 years.

Dora was a dedicated member of the Belle Faith Baptist Church. She volunteered at the Called Anointed Sent Food Pantry in Belle.

In addition to her spouse of 56 years and her parents, she was preceded in death by: two brothers, Everett Taylor and Frank Taylor; two sisters, Jewel Doughty and Ollie Horton.

Funeral Services will follow at 12:00 p.m. on Wednesday, February 18, 2015 with Loraine Bossaller officiating. Interment will follow at Belle City Cemetery.

Expressions of sympathy may be made to the Called Anointed Sent in Belle.

To order memorial trees or send flowers to the family in memory of Dora Pearl Tinnon, please visit our flower store.