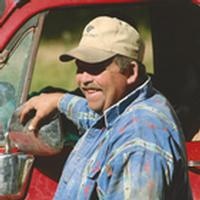 Donald "Eno" W. Zumwalt, age 60, of Belle, passed away peacefully, Saturday, January 24, 2015, at his residence surrounded by his family.

Eno was born on July 29, 1954, in Troy, a son to Jim Zumwalt and Marva (Walton) Zumwalt Kimbrel. Jim survives of Belle and Marva of Troy.

He was a 1972 graduate from Buchanan High School in Troy.

On May 11, 1996, he was united in marriage to Ona Ketcher at his father's home in Belle. They have been residents of the Belle area for over 17 years after moving from Barnsdall, Oklahoma. Ona survives of their home in Belle.

Eno was a cowboy and a cattleman, and being a cattleman, he loved his cows. He liked to ride horses as well as four wheelers and loved taking the grandkids on tractor rides. Although he had lived in different parts of the country, including Colorado, Oklahoma and Thayer, KS, Colorado was his favorite place. Eno liked to visit with people and he never met a stranger. He would open his home to anyone and was a mentor to many young people who were in need of help. He was a member of the Missouri Cattleman's Association and the N.R.A. His greatest joy was spending time with his grandchildren. He will be missed by all that knew and loved him.

In addition to his spouse of 18 years and his parents, Eno is survived by; two daughters, Crystal Widemon and her husband Jason of Tyler, TX and Cami Corwin and her husband Thomas of Thayer, KS; one step-son, Bill Ketcher and his wife Andrea of Siloam Springs, AR; one step-daughter, Patricia Ketcher of Westville, OK; two sisters, Jana Schulte of Herman and Debbie Todd and her husband Doug of Elsberry, Mo; one brother, Jimmy Zumwalt and his wife Wendy of Belle; eleven grandchildren; eleven nieces and nephews and four great-nieces and nephews as well as many extended family members and friends.

Eno was preceded in death by, one daughter, Monica Zumwalt and his grandparents.

An additional visitation will be held on Tuesday, January 27, 2015 from 10:00 a.m. until 11:00 a.m. at the Troy Bible Holiness Church located at 1220 Main Street, Troy, Mo. Funeral Services will follow at 11:00 a.m. with Rev. Milton Schaper officiating. Interment will follow at the Sulphur Lick Cemetery near Troy.

In lieu of flowers, the family requests that expressions of sympathy may be made to the Don "Eno" Zumwalt FFA Scholarship Fund. Donations can be made in care of Sassmann's Chapel, P.O. Box 881, Belle, MO, 65013.

To order memorial trees or send flowers to the family in memory of Donald 'Eno' W. Zumwalt, please visit our flower store.