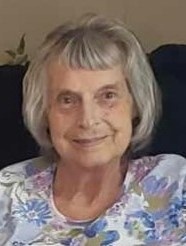 Delores was born October 9, 1935, at her home in Cooper Hill, MO, a daughter to the late Gilbert Joseph Vincent and Minnie Mina (Leach) Vincent. Her father preceded her in death in 1963, followed by her mother in 1964.

Delores attended school in Cooper Hill and graduated the 8th grade in 1950. On December 30, 1956, she was united in marriage to Thomas Jacob Perkins in Owensville, MO and from this marriage 4 children were born. Thomas preceded Delores in death on November 29, 2005.

Delores was a lifelong resident of the Belle area and a member of the Assembly of God Church where she was the secretary/treasurer for over 50 years. She worked for the International Shoe Company most of her young adult life, Casey’s for a short stint, and subbed as a cook for the Maries R2 School; but her true calling was being a “Nana”. She enjoyed cooking, gardening, canning, and going to church. Her greatest love was time spent with family, friends, and her church family.

A visitation will be held on Friday, August 27, 2021, from 9:00 a.m. until 11:00 a.m. at the Faith Christian Center Assembly of God in Belle with a funeral service at 11:00 a.m. with Bro. Bill Perkins officiating. Interment will follow in the Liberty Cemetery near Belle.

Expressions of sympathy may be made to the Faith Christian Center Assembly of God in Belle.

To order memorial trees or send flowers to the family in memory of Delores Perkins, please visit our flower store.