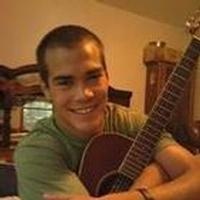 "When he shall die, take him and cut him out in little stars and he will make the face of heaven
so fine that all the world will be in love with night and pay no worship to the garrish sun "
Scene Two Romeo and Juliet Shakespeare

And so it is that we will be ever more in love with the night as Dakotah Michael Kearns, age 23,
of Owensville, MO passed away on October 16, 2013.

Dakotah attended Owensville High School and lived and worked in the construction trade. He was a craftsman, an artist and musician, for he loved to play guitar. He brought joy, laughter, and, most importantly, unconditional love to all that knew him, and because of knowing him many lives are forever transformed. Kody knew no strangers and accepted every person for who they are--he judged no one. Ever true to his generous spirit, his last act of human kindsness was the gift of organ donation. Dakotah was able to save four lives. The blessing of his spirit
will live on in all of us.

Dakotah was preceeded in death by his father Michael Eugene Kearns, his uncle David Elbert Kearns, and his cousin Jesse Custer.

To order memorial trees or send flowers to the family in memory of Dakotah M. "Kody" Kearns, please visit our flower store.