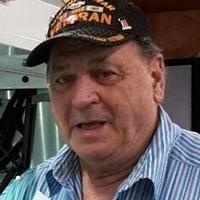 Cornelius “Corkey” Holterman passed away Friday morning February 24, 2017 at his home after a long battle with cancer.

Corkey was a 1959 graduate of Fatima High School. He played the electric guitar and recorded an EP with is band during the 1960’s.

Corkey served in the United States Army and was proud to be a member of The Big Red One during the Vietnam War.

Corkey retired after 30 years as a shop steward from Penske Truck Leasing Company in St. Charles, MO. Corkey continued his education at Penske and earned many awards throughout his employment. He was well respected by fellow employees and it was evident in the retirement celebration he received.

Corkey was kind hearted with a smile and handshake for anyone who walked by. He was a proud father and you could see it in his eyes whenever he spoke of his daughters and sons-in-law. He loved to travel but his larger love was the outdoors where he could boat, hunt, fish shoot, and take care of his animals.

In addition to his parents and spouse of 34 years, Corkey was preceded in death by one daughter Judith Hayes.

A Place of New Beginnings

Fellowship and Dinner: At 4:30 p.m. following the burial.

To order memorial trees or send flowers to the family in memory of Cornelius "Corkey" M. Holterman, please visit our flower store.