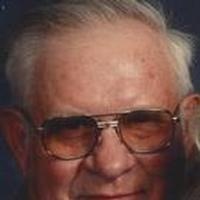 Clyde A. Branson, age 88, of Owensville, passed away Thursday, January 2, 2014, at the Missouri Veterans Home in St. James.

Clyde was born April 13, 1925 in Redbird, a son to the late Alfred and Thelma (Branson) Branson.

Clyde proudly served in the United States Navy on the U.S.S. Saginaw Bay during World War II where he earned a Silver Star and a Victory medal. After leaving the Navy, he worked for Falcfur Company in St. Louis and after moving back to the area worked for Jost's Tire Company for over 30 years.

Clyde was a lifetime member of the VFW. He made a point of attending every event sponsored by the VFW. He was a member of the American Legion in Rosebud. Clyde was regular at the Owensville McDonalds for morning coffee with the guys. He loved bingo and attending church picnics in the area. He enjoyed taking road trips and loved animals with his favorite being his dog, Queenie.

Clyde served as Deacon for the Owensville Presbyterian Church for a time before attending the Methodist Church of Koenig in Belle.

In addition to his parents and his wife, Clyde was preceded in death by: three brothers, Raymond Lavern Branson, Everett Dewayne Branson and Alfred Clarence Branson, Jr.

Funeral Services will follow at 1:00 p.m. at Sassmann's Chapel in Bland, Mo with Pastor Sandy Dixon officiating the service. Military honors will be conducted at the conclusion of the funeral services.

Interment will follow in the Countryside Memorial Gardens near Owensville.

Expressions of sympathy may be made to the family of Clyde A. Branson.

To order memorial trees or send flowers to the family in memory of Clyde Austin Branson, please visit our flower store.