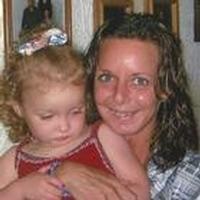 Cheryl S. Berkbuegler, age 34, of Freeburg, formally of Potosi, passed away Wednesday, June 11, 2014 at her home after a long battle with cancer.

Cheryl was born on May 4, 1980, in Potosi, a daughter to Sharron Witt and the late Walter Mackley.

On March 5, 2004, Cheryl was united in marriage to William "Billy" Berkbuegler in St. Clair and from this union a daughter, Jaden, was born. Billy preceded her in death on February 5, 2010.

Cheryl attended school in Potosi and proudly received her G.E.D. She was employed as a factory worker before a car wreck limited her ability to work. Despite her injuries, Cheryl liked to stay very active and liked to get out to have a good time and just enjoy life. She loved the rain. If it was raining she would make every attempt to get out in it. She also loved to swim and was a music lover. Alternative and rock were her favorite. Cheryl biggest joy in life was spending time with her family and especially with her little girl, Jaden. Cheryl will be missed and remembered by all that knew and loved her.

In addition to her husband and father, Cheryl was preceded in death by: two brothers, Rusty Mackley and Tommy Mackley;

Private memorial services will be held at a later date.

In lieu of flowers, expressions of sympathy may be made to the family of Cheryl, in care of Sassmann's Chapel. P.O. box 881, Belle, MO 65013.

To order memorial trees or send flowers to the family in memory of Cheryl Sue Berkbuegler, please visit our flower store.