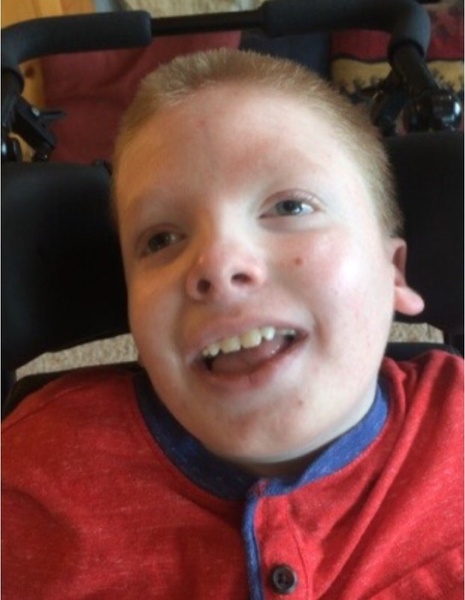 Cameron Louis Shanks, age 15, of Belle passed away peacefully Saturday, November 9, 2019 at his home surrounded by his family.

Cameron was born August 31, 2004, at St. Mary’s Hospital in Jefferson City, a son to Bruce and Sunshine (Boucher) Shanks.

Cameron was tough and a fighter, living a much longer life than was expected when he was born. He was a very happy child with a contagious smile that spread happiness to all that knew him. Cameron enjoyed playing on the floor and of course had a very special bond with his older brother Paul. He was blessed by his family’s tender and loving care for his whole life. Cameron was a true miracle of love for 15 years and a treasure of grace to this world who taught his family and those that knew him about love and compassion. He will be missed greatly by his family and all those that knew and loved him.

Cameron is survived by: his parents, Bruce and Sunshine Shanks of Belle; one brother, Paul Shanks of Belle; his paternal grandmother, Connie Shanks of Rolla; his maternal grandparents, Louis and Connie Boucher of Dixon; two uncles, Ralph Boucher and his wife Amber of Dixon and Calvin Shanks and his wife Sarah of Paducah, KY; and four cousins, Alexa Hall, Kelsea Boucher, Madeline Boucher, and Jesse Shanks as well as many extended family members and friends.

Cameron was preceded in death by one grandfather, Joe Shanks.

Private family services will be held under the direction of Sassmann’s Chapel of Belle. Interment will be in the Francis Cemetery.

In lieu of flowers, expressions of sympathy may be made to the  Osage County All Inclusive Playground. A special project that will be located in Linn in the near future. Donations may be made in c/o Sassmann’s Chapel, P.O. Box 881, Belle, Mo 65013.

To order memorial trees or send flowers to the family in memory of Cameron Louis Shanks, please visit our flower store.