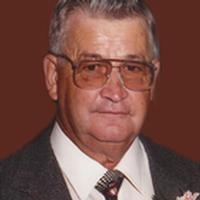 Bill was born on May 16, 1927 in St. Genevieve, Missouri to Martin and Anna (Bader) Bahr. Bill grew up in Chaffee, Missouri living with his Uncle Otto and Aunt Dora (Bader) Vessell. In January of 1945, Bill left his senior class early and joined the Navy. He served as a pharmacist's mate and was stationed in Iwo Jima. On May 14, 1949, he united in marriage to Bertha Ann Wulfers of Cape Girardeau, Missouri. From this union five sons and one daughter were born.

Bill, Bert, and three sons moved to Rolla in 1952 and opened a retail furniture store. In the sixties, Bill and his cousin, Clyde Vessel, moved Vessel and Bahr Furniture to the corner of Sixth and Kingshighway in Rolla.

Bill's life reflected many interests. Along with forty years of retail furniture sales and other businesses, Bill was a farmer and introduced Simmental cattle, as well as, "thornless" blackberries to the area. His civic duties included Grand Knight with the Knights of Columbus and he served proudly on the Phelps County Regional Medical Center Hospital Board for several terms. While all of these interests were important, nothing was more important to Bill than his family.

Services for Burnell "Bill" Bahr will be held on Wednesday, March 25, 2015 at St. Patrick's Catholic Church in Rolla. The rosary will begin at 9 a.m. with a visitation to follow from 9:30 a.m. until 11:00 a.m. in the Northex of the church. Funeral Mass will begin at 11 a.m. with Fr. Charles Pardee officiating.

In lieu of flowers, contributions can be made to Phelps County Regional Medical Center or St. Patrick's Catholic Parrish/School.

Funeral services under the direction of Sassmann's Chapel of Belle, Missouri and Rolla Cremation and Memorial.

To order memorial trees or send flowers to the family in memory of Burnell Martin Bahr, please visit our flower store.