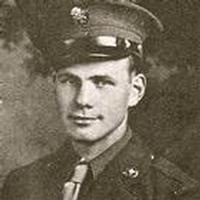 Bruce “Duke” A. Zulauf, age 93, of Bland, passed away Thursday, April 17, 2014, at the Frene Valley Healthcare South in Owensville.

Bruce was born on September 10, 1920, in St. Louis, a son to the late Albert W. and Anastasia (Powers) Zulauf. The family later moved to the Redbird area and except for his time in the service, Bruce remained a resident for over 50 years.

Bruce proudly served his country in the Army Air Corp as a mechanic for the 451 Bomber Group stationed in Italy during WWII. He was very proud of his service to his country. After his service, Bruce returned to the US and became a truck driver. He drove for the family store in Redbird and for the U.S. Express as well. He delivered steel most of the time including long construction beams which was a very dangerous job.

Bruce was a talker. He enjoyed going to the local cafes to chat with the people. He was a fun loving man and felt as if he had never met a stranger. He was a lifetime member of the V.F.W. Post #6133 and a Teamster.

Bruce is survived by a host of nieces, nephews, cousins, extended family members and friends

In addition to his parents, Bruce was preceded in death by one sister, Patricia Ann Oldfather and one brother, Don Zulauf.

Visitation will be held from 10:00 a.m. to 12:00 p.m. on Monday, April 21, 2014, at Sassmann’s Chapel in Bland. Interment will follow in the Bowen Cemetery near Redbird with full Military Honors.

Expressions of sympathy may be made to the V.F.W. Post #6133

To order memorial trees or send flowers to the family in memory of Bruce 'Duke' Allen Zulauf, please visit our flower store.