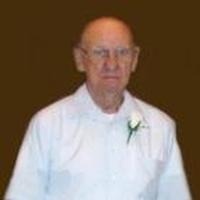 Berthel attended school in Vienna and proudly graduated in 1945. On June 16, 1950 he was united in marriage to Ruth Naomi Sadler at the Union Hill Baptist Church near Vienna and from this union five children were born. Ruth preceded Berthel in death on January 13, 1998.

Berthel was a lifelong resident of the Vienna area and a member of the Union Hill Baptist Church. He worked many different jobs throughout his life, including a stint as a deputy sheriff and a truck driver, but his true calling was "the farm". He enjoyed hunting, fishing, gigging and listening to bluegrass, but his greatest love was time spent with his family, friends and his beloved St. Louis Cardinals.

Funeral Services will be held at 10:00 a.m. on Saturday, December 13, 2014 at the Union Hill Baptist Church near Vienna with Bro. Jimmy Bickell officiating. Interment will follow in the Union Hill Cemetery.

Expressions of sympathy may be made to the Union Hill Cemetery fund.

To order memorial trees or send flowers to the family in memory of Berthel Anderson Bray, Sr, please visit our flower store.