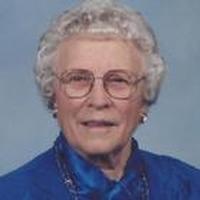 Ellen was born on June 17, 1924, in Vienna, a daughter to the late Lyle Willard and Maude Mae (Sudheimer) Terwilliger.

Ellen was a homemaker and an active member of the First Baptist Church of Belle. Ellen was a Sunday school teacher, a member of WMU and served on the Hostess Committee. When her children were younger, she was involved with the Dixie 4-H Club.

She enjoyed quilting, gardening and spending time with her children, grandkids and great grandkids.

In addition to her parents and spouse of 52 years, Ellen was preceded in death by: two brothers, Charles and John Terwilliger; one sister, Charlotte Tackett; and one son-in-law, Robert Newbound.

Funeral Services will be held at 10:30 a.m. on Tuesday, September 9, 2014, at First Baptist Church in Belle with Bro. Jimmy Bickell. Interment will be held at the Union Hill Cemetery near Vienna.

Expressions of sympathy may be made to the American Cancer Research or the First Baptist Church in Belle.

To order memorial trees or send flowers to the family in memory of Barbara Ellen Duke, please visit our flower store.