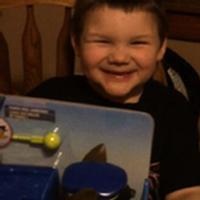 Alex J. Turner, age 5, of Belle, passed away Friday, June 24, 2016, at the Cardinal Glennon Children's Hospital in St. Louis after sustaining injuries in an automobile accident.

Alex was born on March 8, 2011, in St. Louis, a son to Frankie and Brenda (Wilcox) Turner. Both parents survive of the home as well as 8 brothers and sisters.

Alex was a very easy going and happy child who was always smiling. He was very loving and liked to give hugs to everyone. Alex always seemed to worry about everyone else and he idolized his older brother, Richard. He was very energetic, had a great sense of humor and liked to be the center of attention. Alex liked Batman and enjoyed playing his DS, playing, swimming, and watching his favorite T.V. show, Paw Patrol. He always liked to play the hero in games and that became a reality after he passed. Alex was a organ donor, and with his donations, saved 5 lives. For this, he is a true hero. He will be missed by his family and his smile will be missed by all.

He was preceded in death by one sister, Kassidy Turner, one uncle, David Turner, and two grandfathers, Art Turner and Robert Ritrovato, Sr.

Visitation for Alex will be held from 1:00 p.m. until 3:00 p.m. on Wednesday, June 29, 2016 at Sassmann's Chapel in Belle. Funeral services will follow at 3:00 p.m. with Jimmy Hance officiating. Interment will be in Bland Union Cemetery.

Expressions of sympathy may be made to the family of Alex Turner.

To order memorial trees or send flowers to the family in memory of Alex Jordyn Turner, please visit our flower store.