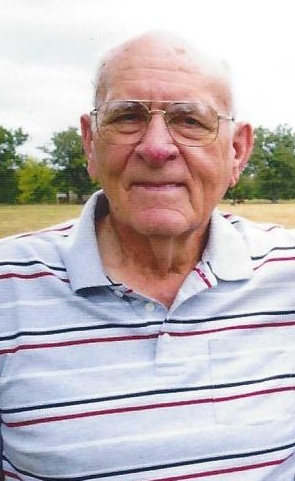 Albert Bray, Jr., age 84, of Belle passed away Monday, June 29, 2020 at Gasconade Manor Nursing Home in Owensville surrounded by family and friends. He was born December 15, 1935 in St. James to Albert and Grace (Love) Bray. He grew up on the farm outside of Belle and graduated from Belle High School in 1953.

Albert married Naomi Kraenow on June 1, 1957 and together they resided on the family farm. Two daughters were born to this union, Donna Kay and Dawnette Ann. Albert was a longtime member of the Zion Evangelical Free Church in Bland.

Albert was very active in the Belle fair, and he served on the board for 48 years putting in many long hours before, during, and after the fair. He started out young, following after his father, who helped establish the 1st Belle Fair. He was the District Sales Manager and later the Missouri Turkey specialist for the Ralston Purina Company and retired from Purina after 28 years.

Albert was a lifetime farmer, taking over the family farm at age 15, after his father passed. He took pride in helping other young farmers learn about cattle farming, and taught his daughters to put up hay and take care of the cattle at young ages and showed cattle at many fairs throughout his life. His love of animals and cattle farming passed on to his kids, grandkids, and great-grandkids.

Albert and Naomi also loved to travel. Although Albert worked sun up to sun down, he managed to take his family on a two week vacation almost every summer. Later they traveled on many trips with his Purina family and friends, and for the past 22 years have been snowbirds, spending 4 months at their winter home in Mission, Texas.

Albert is survived by his wife of 63 years, Naomi, and his daughter Donna Campbell with her husband Rocky of Belle; granddaughter Jessi Foust with her husband Justin of St. James; grandson Tyler Campbell and his wife Tommi of Belle; great grandchildren Jake Foust, Jaci Foust and Tatyn Campbell; stepsister, Chalice Glenn of Albuquerque, New Mexico; stepbrother Willis Glenn with his wife Cora of Daytona, Florida; and step sister-in-law Betty Glenn of Springfield, and several step nieces and nephews, and many, many close friends.

Visitation for Albert will be on Thursday, July 2, 2020 at Sassmann's Chapel from 5:00 p.m. until 8:00 p.m. The public is welcome to attend while following social distancing guidelines.

Funeral services will be at 11:00 a.m. on Friday, July 3, 2020 at Sassmann’s Chapel with Kevin Runge and Mark Farran officiating. Interment will follow in the Old Bland Cemetery outside of Bland.

Expressions of sympathy may be made to the family or to the Old Bland Cemetery.

To order memorial trees or send flowers to the family in memory of Albert Bray, Jr., please visit our flower store.